Why We Need To Go Autonomous

Autonomous ships offer a number of advantages over human-driven vessels, where a major topic is a promise of improved safety. Human-error accidents are all too common and costly. For example, take a look at the collision off the coast of Corsica on Octorber 7, 2018, when the ferry Ulysses departed from the port of Genoa and cruised through the Mediterrean Sea. As the captain received a phone call just before dawn, he stepped away from the station. Moments later, the Ulysse rammed into the side of a container ship, CSL Virginia, resulting in a massive oil spill. The damages were estimated at 13.5 million euros, with cleanup costs estimated at 10 million euros.

Another major topic is the possibility of zero emission transport. By 2020 Yara expects to launch the world’s first fully electric and autonomous container ship, with zero emissions. With this vessel, Yara will reduce diesel-powered truck haulage by 40,000 journeys a year!

Join the journey of shipping giants

Today’s autonomous ships take many forms. Last year, in the Norwegian town of Sunde, the Finnish company Wärtsila demonstrated an autodocking system on a coastal ferry whose captain cautiously took his hands off the steering as his ship glided into the quay. In the same year Rolls-Royce was the first to demonstrate a driverless system for a commercial container ship, which bodes well as they currently are signed up for delivering 18 autonomous ferries to the two Norwegian ferry companies, Fjord 1 and Fosen Namsos Sjø.

Commercial shipping giants like Nippon Yusen are also beginning to send autonomous ships to sea. Nippon Yusen, Japan’s largest marine shipping company, told Bloomberg that it planned to test a remote-controlled vessel across the Pacific Ocean in 2019 as it pursues fully autonomous technology.

However it is the previously mentioned Yara Birkeland that is looking promising. likely to be the first fully autonomous operational vessel. With the driverless system being provided by shipping giant Kongsberg, the 260-foot container ship pursues the title of the world’s first fully operational autonomous vessel.

According to the United Nations,  90 percent of the world’s trade is carried by sea and 10.3 billion tons of products were shipped in 2016, where the world’s 300 or so deep-sea shipping companies have a combined revenue of $10 billion.

According to Allianz Global Corporate & Speciality, human errors account for between 75 and 96 percent of all shipping accidents, with human error resulting in more than $1.6 billion in losses between 2011 and 2016. 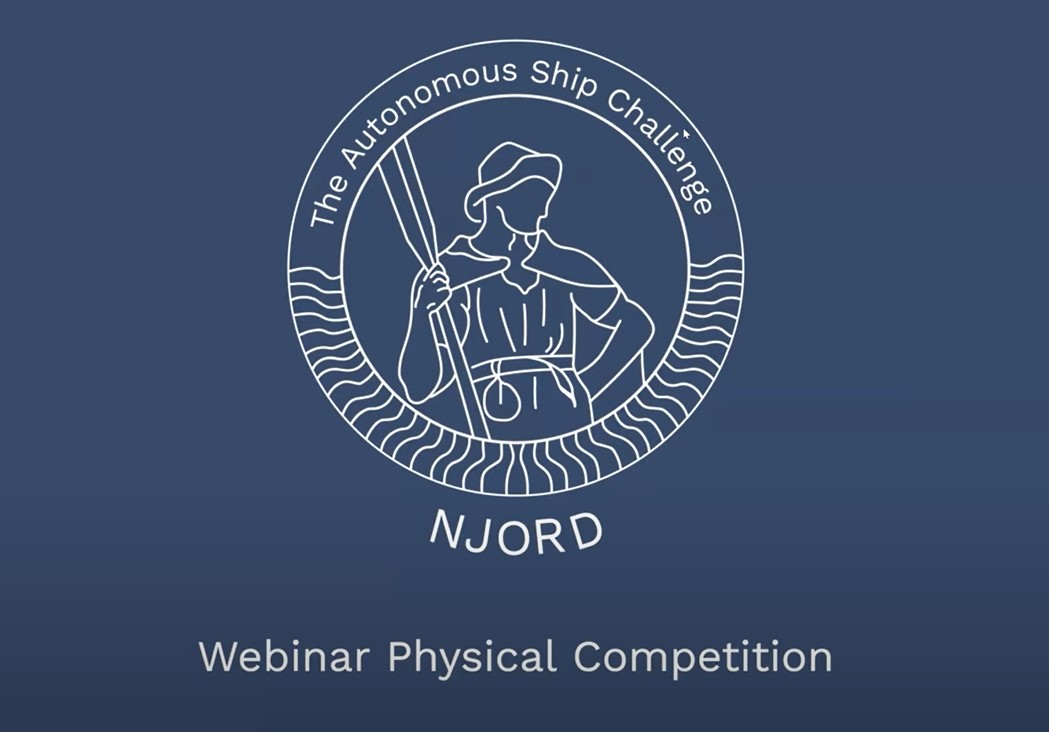 Welcome to Njord's webinar for the physical competition on Wednesday 30th of March
Read more..
Have you seen this?

Welcome to Njord's webinar for the physical competition on Wednesday 30th of March
Read more.. 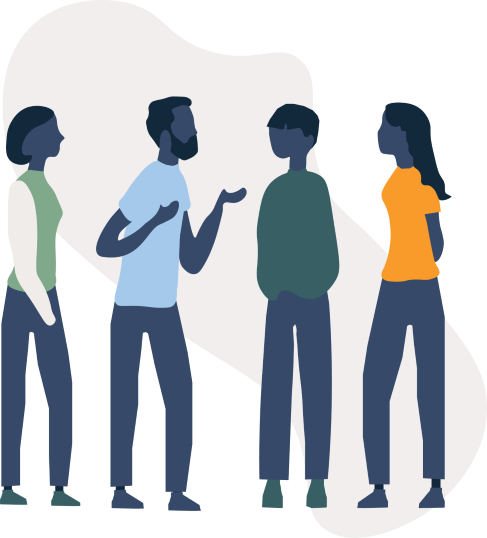 The new deadlines are 1. March (physical) and 1. April (digital). Registration is open on the 2022 Challenge page!
Read more..

The technical specifications for the 2022 competition are ready! 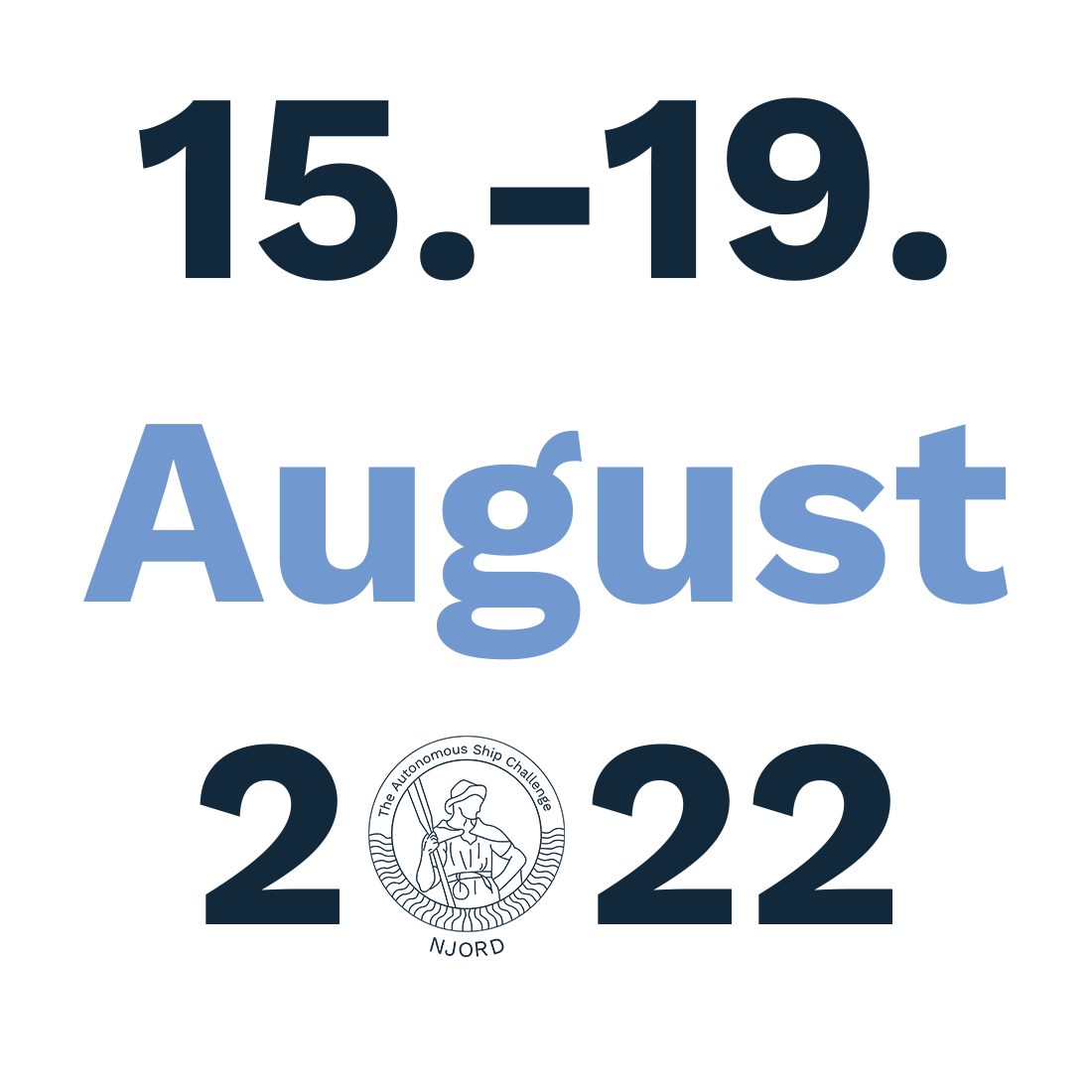 The 2022 challenge will include a physical competition. Teams will be asked to design and build a fully autonomous surface vessel which will compete in 4 different categories. We can't wait!
Read more.. 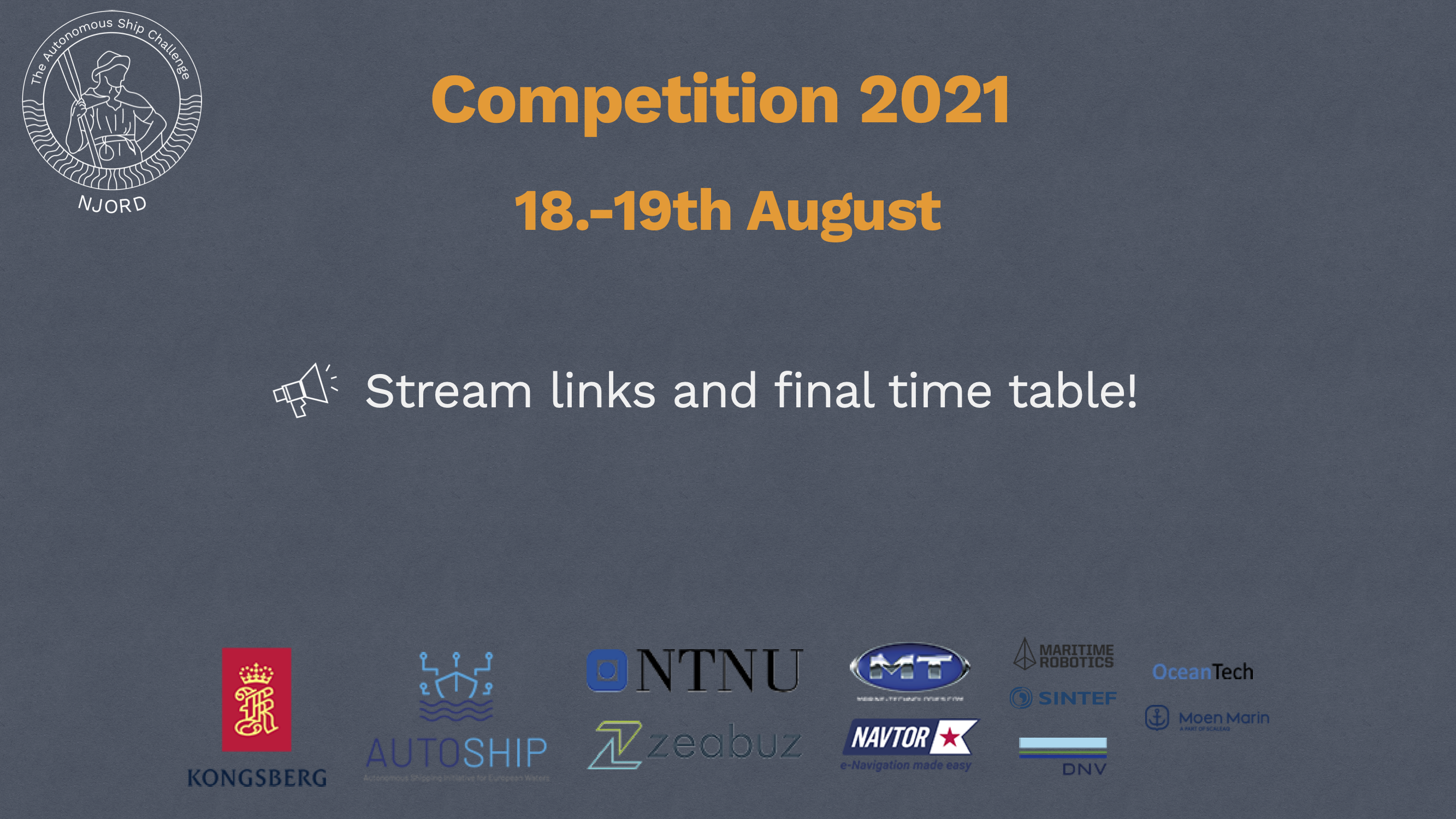 Here you find the links to follow the events during Njord - The Autionomous Ship Challenge 2021, as well as the a short description and time table for the events.
Read more..

Competition 2021 around the corner 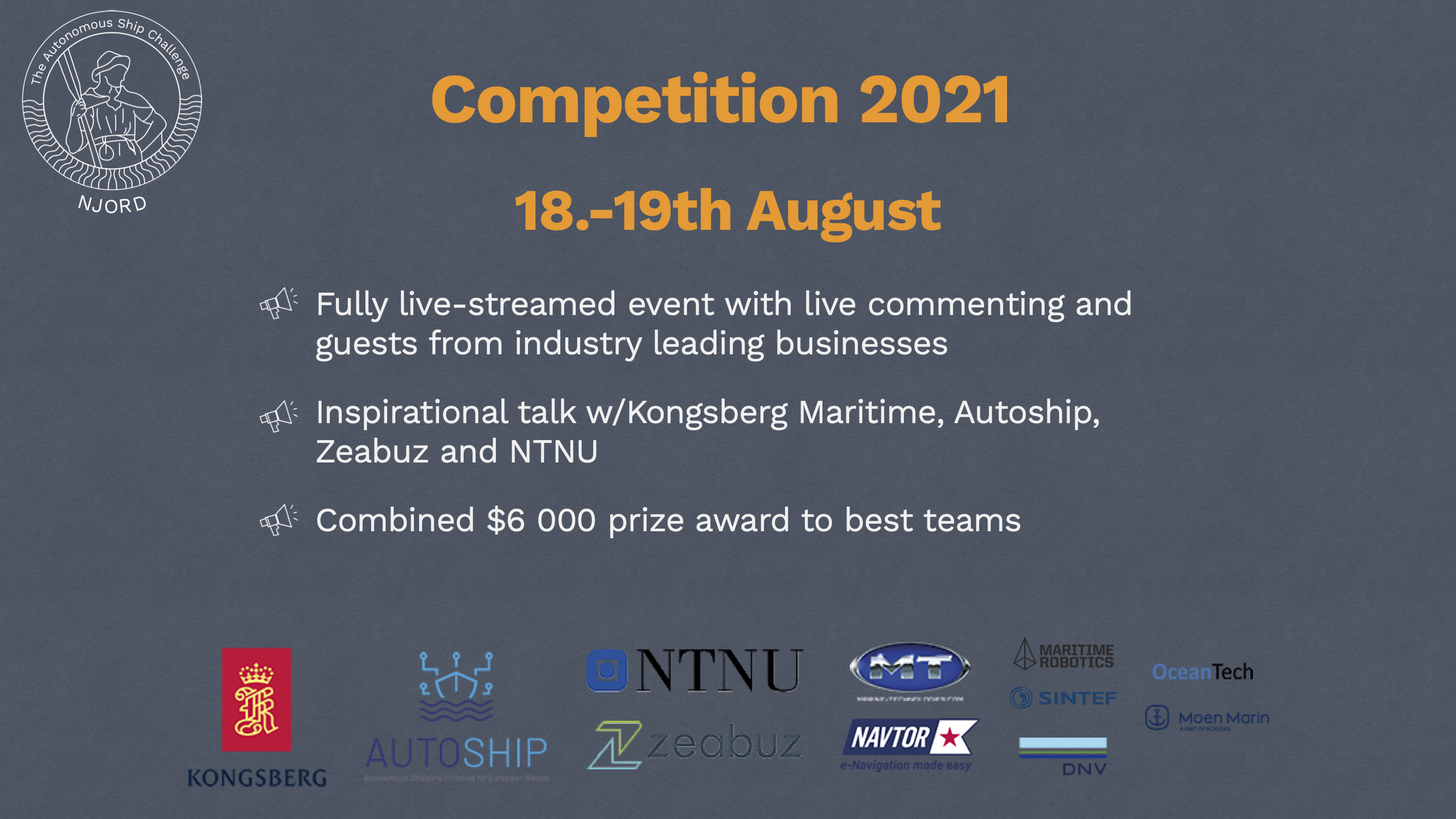 We are approaching the first annual edition of Njord - The Autonomous Ship Challenge!
Read more..

Second round of check-ins

It's time for our second round of check-ins! Make sure your team has downloaded and tested the latest software updates. We are looking forward to catching up with you all!
Read more..

As the summer holiday approaches, we here at NJORD have decided to set the final registration date for new teams to the 9th of May.
Read more..

Forum up and running 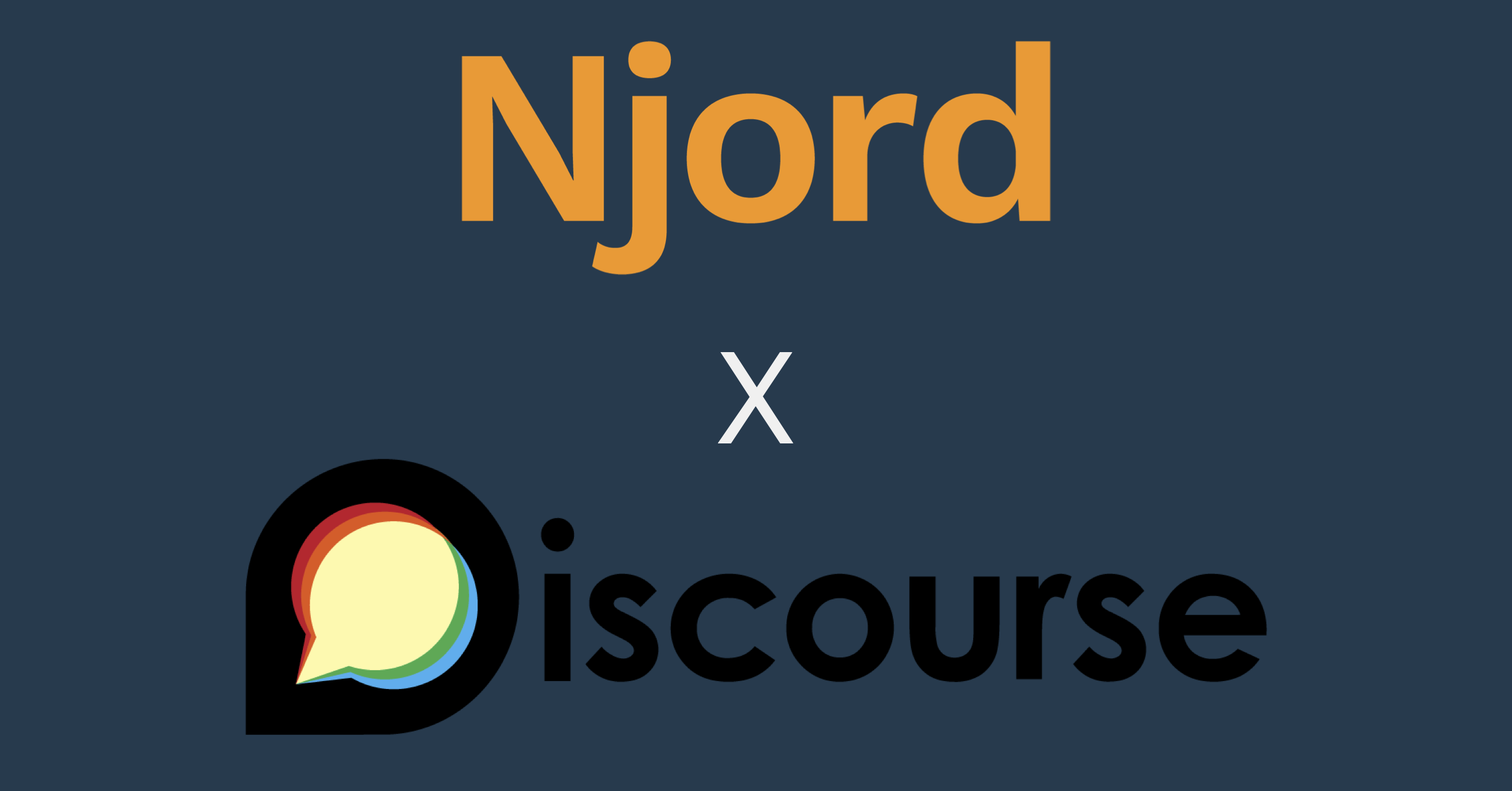 Some of you experienced problems with the forum lately. This should now be fixed. Check it out!
Read more..

Date for the 2021 Challenge 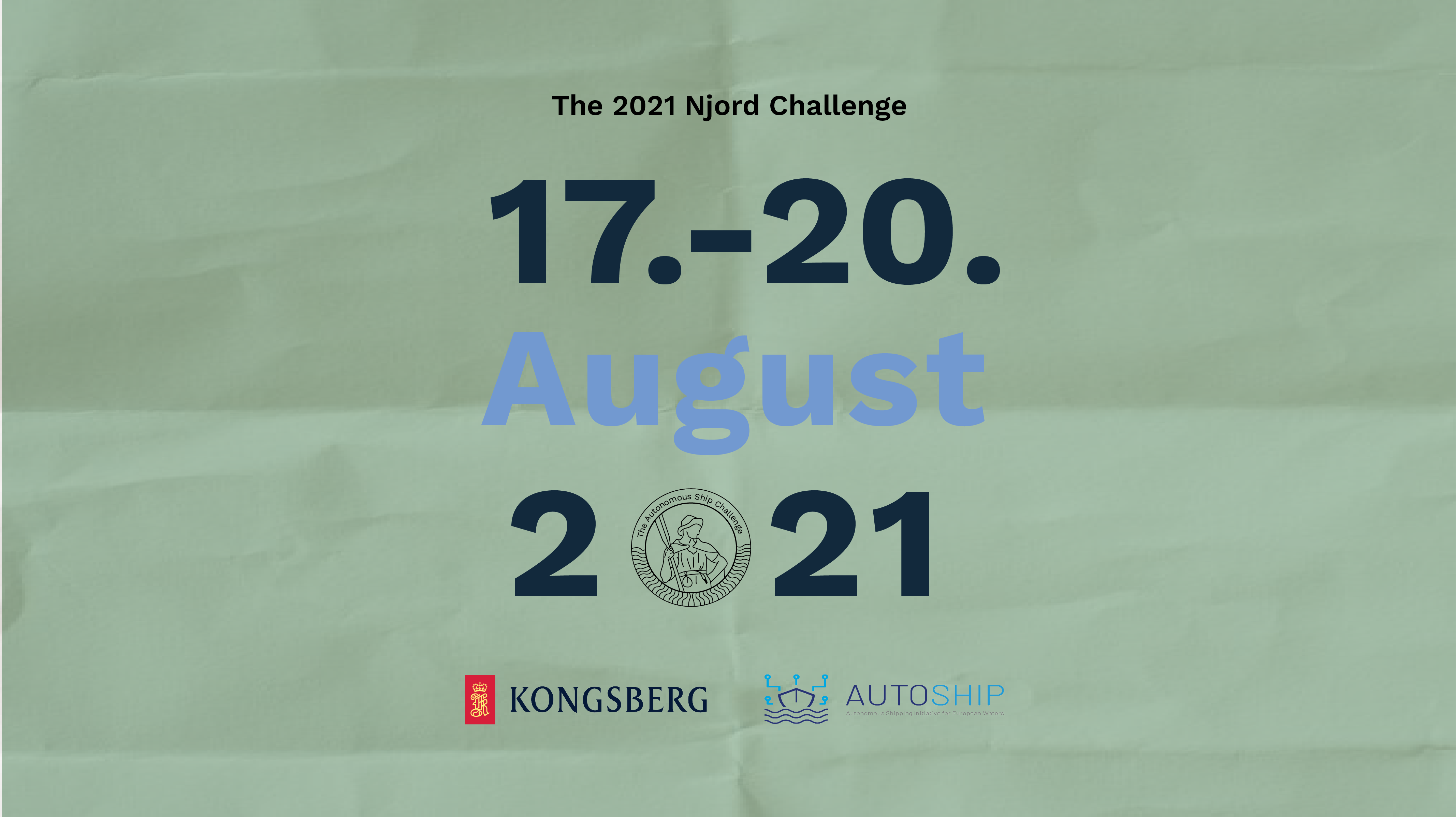 The date for the 2021 Njord Challenge has been set!
Read more.. 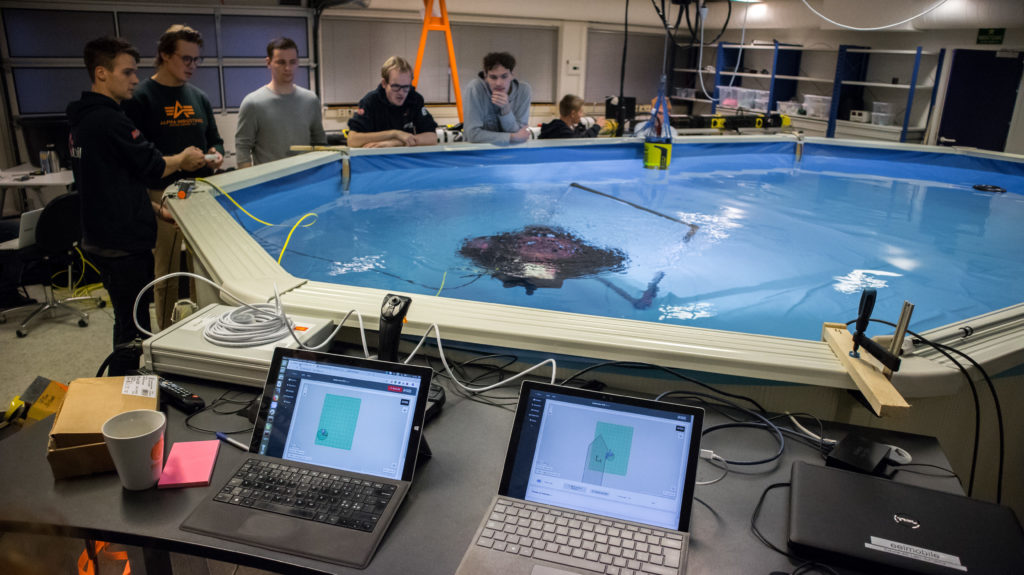 Our project leader, Aida Angell, is writing for Ocean Autonomy Cluster about the students that are driving innovation forward during these special times. Check it out!
Read more.. 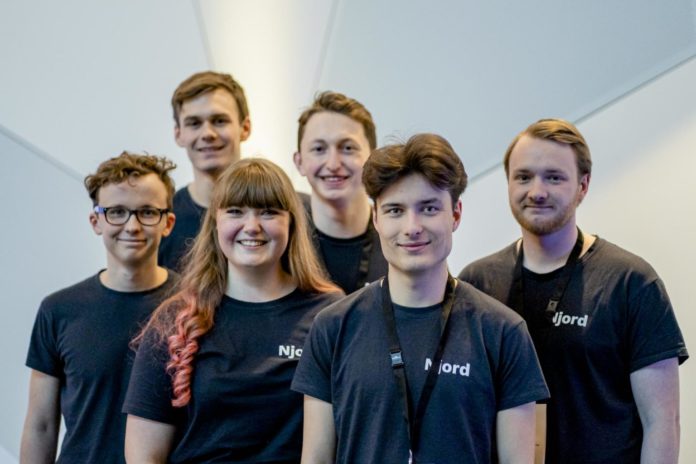 This is an article posted by Shipping24 in March 2020. The article is written in Norwegian and was posted when we were still planning for a physical competition for the 2021 challenge.
Read more..

We are going digital for the 2021 challenge! 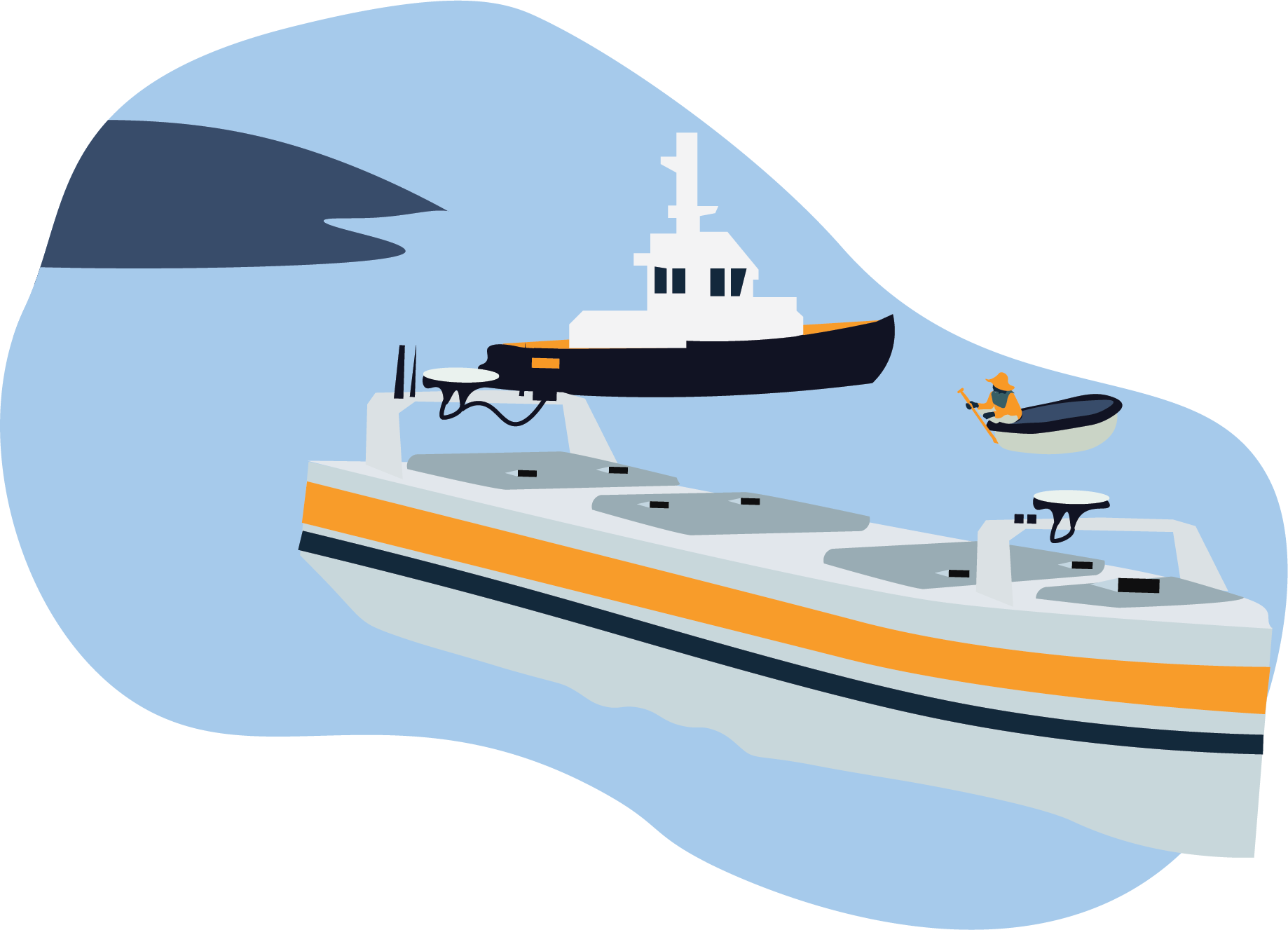 We are excited to announce that the first-ever Njord - Autonomous Ship Challenge will take place in August 2021, and will be fully digital! This will allow teams from all over the world to step up to our challenge. The competition will culminate with the teams being invited to Trondheim to meet each other, witness their own simulations in real-time, and ultimately crown the winner!
Read more..